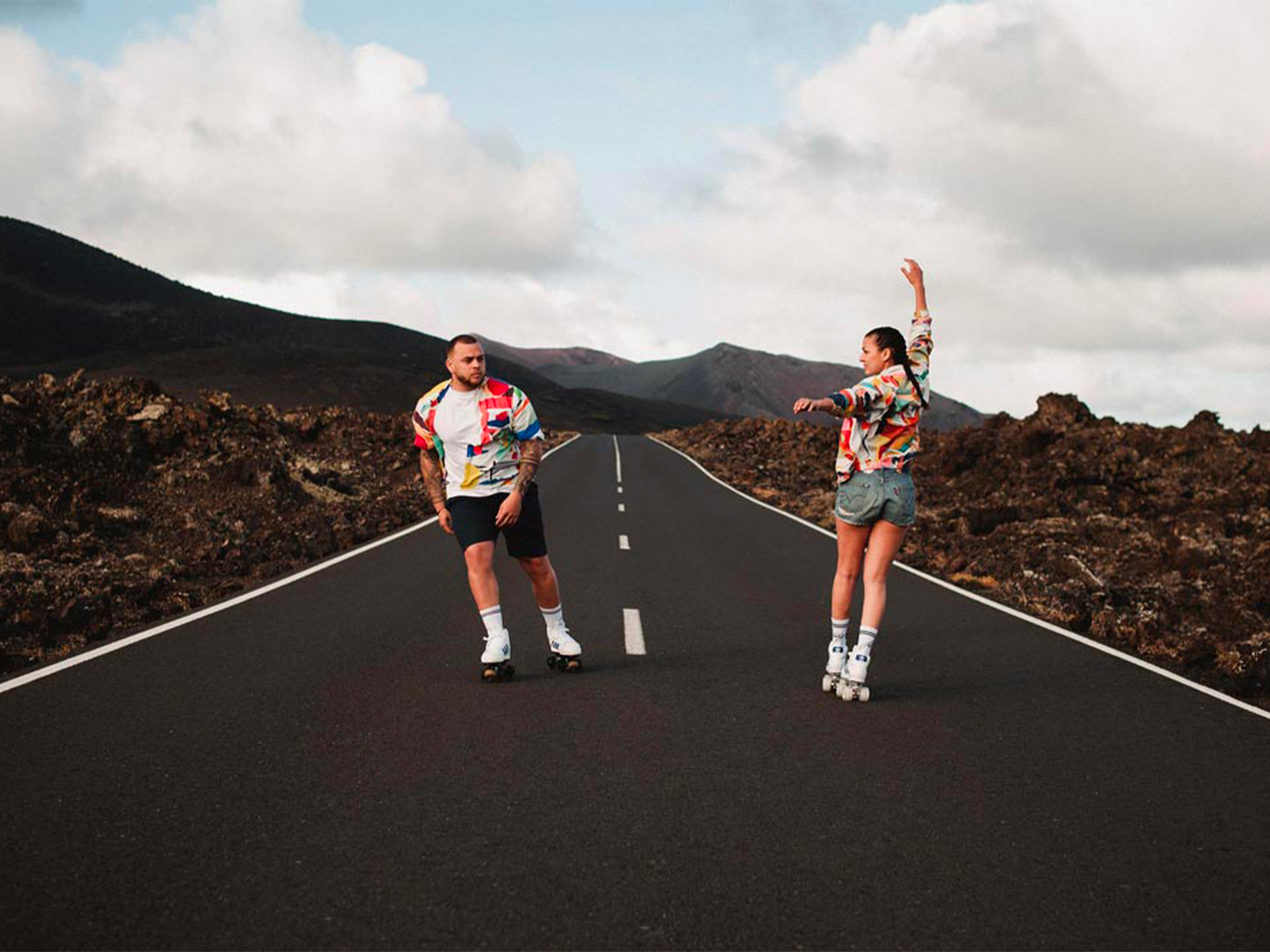 Beginner or advanced skater, you are searching for a sport to practice with your roller skates? We present you today six sport practices on roller skates. Alone, in a duo or in a team, discover the discipline that fits you best.

/EXPRESS WITH YOUR BODY 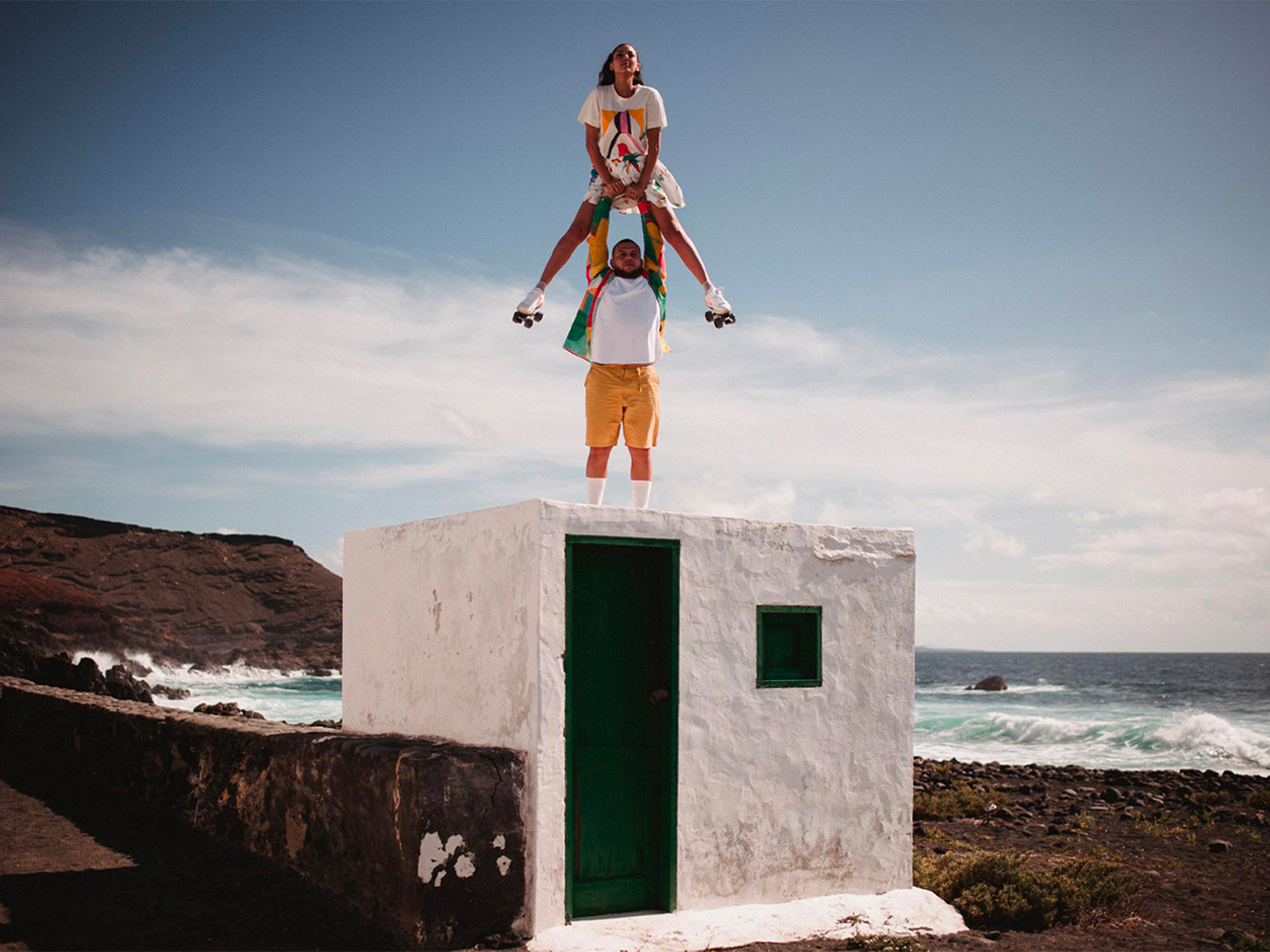 Accessible alone, in couple or in team, artistic skating on wheels is a pluridisciplinar and creative experience. We distinguish the artistic discipline from dance and group skating.

In solo, artistic skating consists in realizing acrobatic figures (jumps, spins), combined with choreographic elements to harmonize the whole performance. This is called a program. In this discipline, we differentiate the short format whose content is semi-imposed by the jury during high level competitions, and the long format whose content is much freer.

Artistic skating can also be done in duet. Just as in solo, the choreographic steps link the figures and harmonize the result. The difference remains in the acrobatics, which link individual or duet technical figures, such as lifts, synchronized couple spins, swirls and throwing jumps.

Dance, unlike artistic skating, doesn’t require performing acrobatic figures. In solo competition, the skater has to perform a choreography to music. The jury examines the body's support and skating quality to determine the score. In couple, the dance is judged by its technicity and elegance, as well as the complicity between the two skaters.

Finally, it is possible to achieve performances by groups of 4 to 12 people, based on static or mobile choreographies.

Many clubs and associations suggest this hobby, in France and throughout the world. What if this sport was made for you? 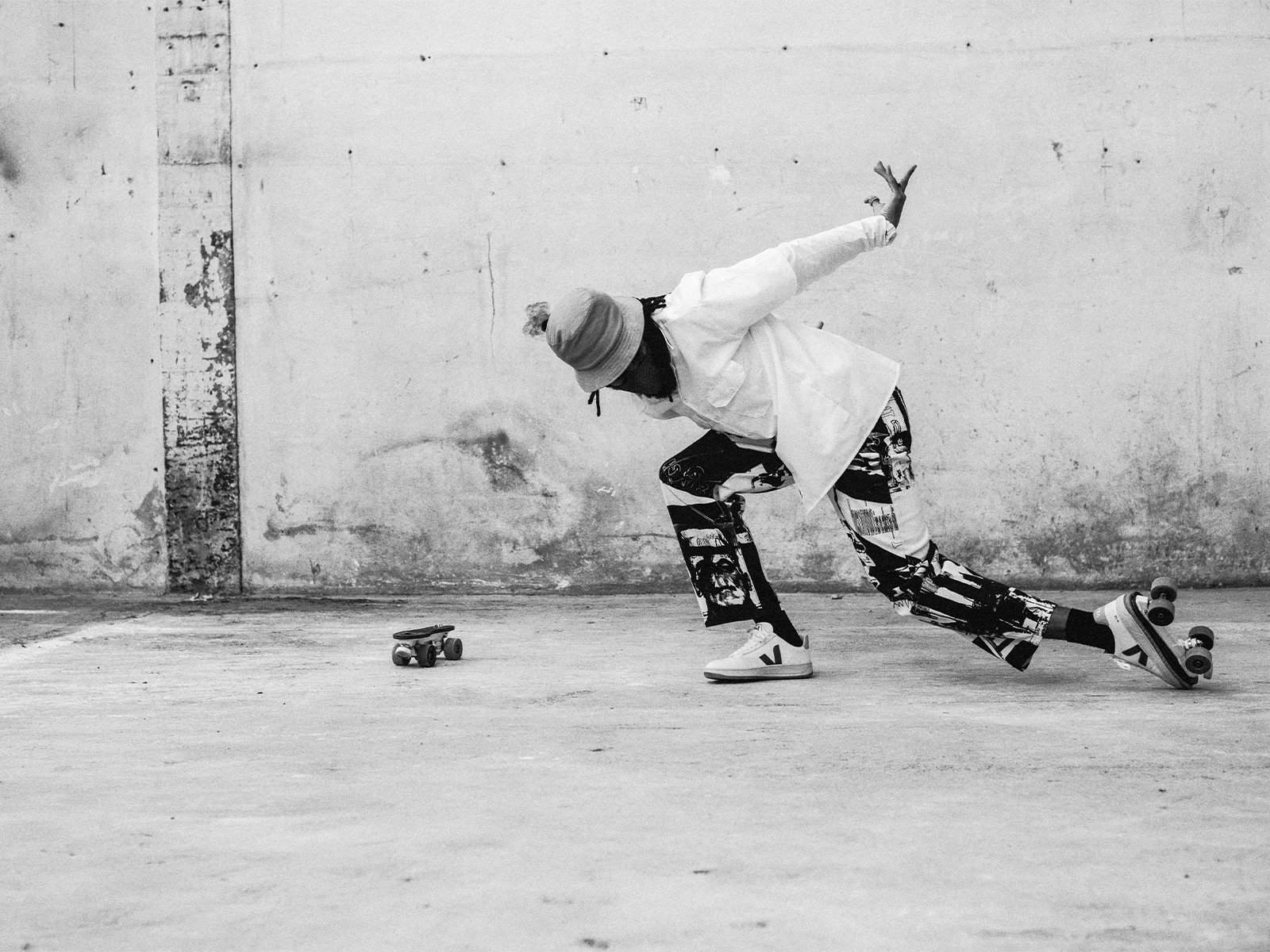 Roller dance is a discipline inherited from the 1970s. Freer than artistic skating, this activity can be inspired by trends as varied as disco, hip-hop or funk.

At its creation, roller disco was able to impose itself compared to other musical styles. Multiple pop-culture works have included this trend, such as “Xanadu” and “La Boum” in 1980, or the TV show “Malcolm in the Middle” in the 2000s, where roller dance is one of the hidden talents of Hal’s character.

Nearly half a decade after its golden era, roller dance is coming back in force with the organization of roller parties by roller skating clubs. Hip-hop, salsa, R&B or electro house: there is something for everyone, whatever their style is. Flaneurz, through its association Flaneurz Roller Skating Club, regularly co-organizes roller parties on weekends in all four corners of Paris.

The next big summer event will take place over three days. The Flaneurz Roller Skating Club and @wheelz_and_feet vinvite you to come dance on foot or roller skates from the 23 to the 25 of June 2023. Find all the information on the Instagram account @rdvdanceskateinparis.

The roller derby is a contact race whose games take place in 60 minutes with two teams of fifteen players. It consists in skating as fast as possible on an oblong-shaped track, whether it is flat or bent. The goal is simple: in a given period of time named ”jam”, one of the players has to pass the opponents without getting thrown to the ground nor getting out of the track.

Roller derby saw a surge in popularity at its creation in the 1920s but declined slowly starting from the second world war. It was in the 2000s that it rebirthed with the creation of the first modern American league “Bad Girl Good Woman Productions”. Intimately linked to feminism, roller derby has notably contributed to American women’s emancipation at the end of the 1960s and allowed ahtletic professionalization of women. Through time, although mostly feminine, this activity has become less segmented.

In pop-culture, this sport was highlighted first in 1989 with the American TV show ”RollerGames”, then in 2009 in the movie ”Bliss”, directed by Drew Barrymore and whose main character is embodied by Elliot Page.

From now on, more than a thousand French teams have been created. If you are not afraid of speed and physical contact, this sport is certainly made for you. You can find a dedicated association or club in multiple cities worldwide.

Another sport practice on roller skates is rink hockey. Close to field hockey, rink hockey is a collective sport on traditional roller skates. Players are equipped with either a wooden or carbon stick. It was during the 19th century that this sport was created in England. From 1875, it gained in popularity, and the first association was born. It also grew in the United-States where 7 leagues co-existed in 1885. A decade later, rink hockey was generalized and exported progressively on an international scale. In Europe, Spain, Portugal and Italy, particularly fond of it, defy each other during international competitions. 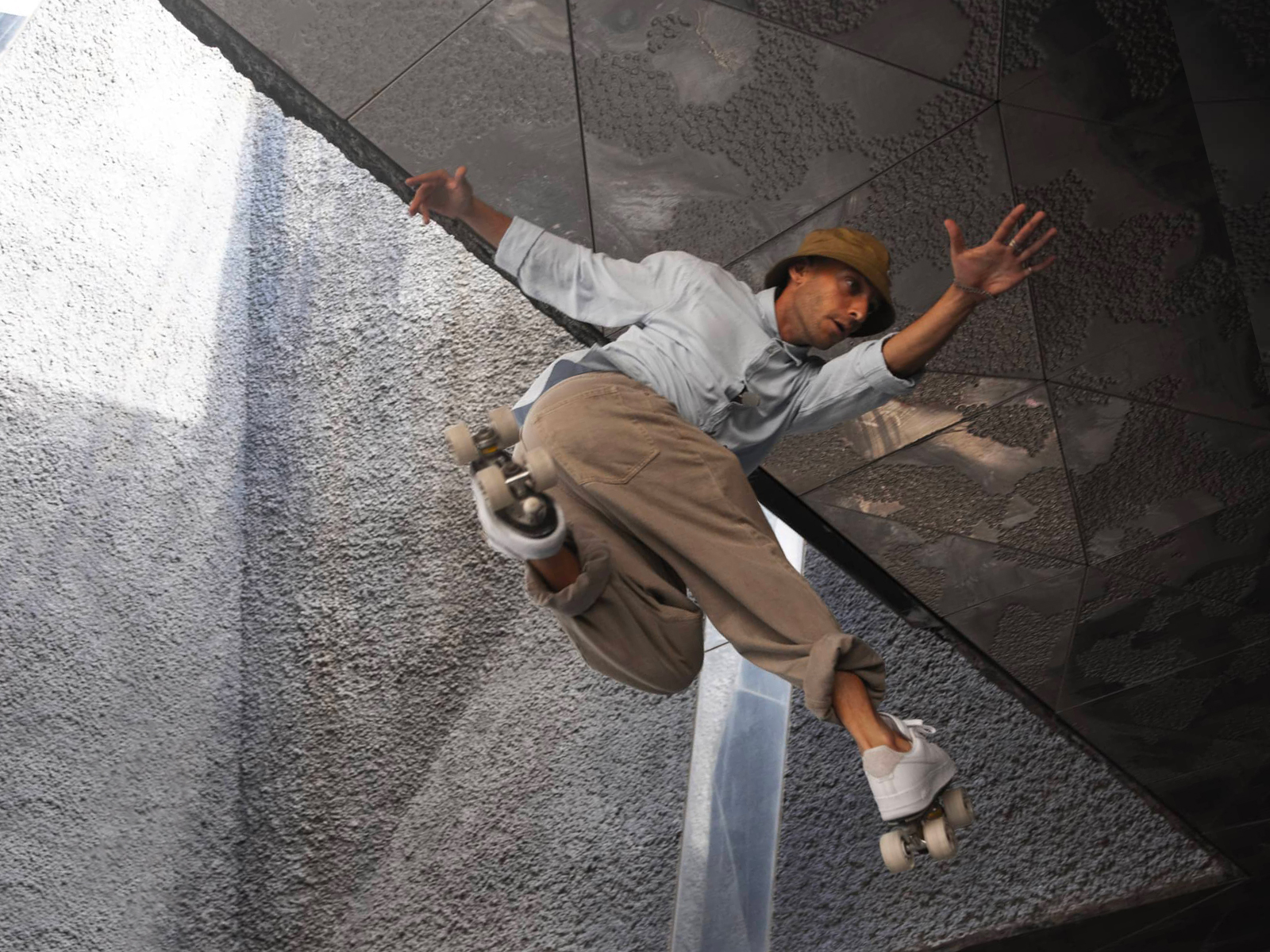 Addicted to adrenaline? Acrobatic roller skating, or freestyle, is made for you.

Freestyle roller gathers multiple disciplines. Jump is a specialty divided into three differentiated practices in official competitions. We distinguish the high jump, which consists in jumping over a bar gradually higher with the help of a springboard, from pure height whose principle is similar but is practiced without a springboard. The style jump is judged through technical figures executed by the skater. Technicity is the keyword of this discipline.

Slalom is another acrobatic specialty, divided into two distinct practices: the speed slalom and classical freestyle slalom, formerly named style slalom or figure slalom. In speed competition, the main objective is to be the fastest to browse 20 cones spaced of 80cm from each other on one foot only. The practice of style, for its part, functions by program, called “run”, where the skater can freely perform technical figures on either one of the three slaloms that are suggested to them: one where cones are spaced of 50cm, the other of 80cm and the last one of 1m20. The skater is then graded by the judges according to a precise scale, technical (60% of the score) and artistic (40%), and has to accumulate a maximum of points to win the competition.

Finally, for urban gliding amateurs, acrobatic roller skating also includes street, bowl and ramp. The street discipline leaves room for creation and expression through the realization of gliding and jumping figures on the urban furniture. Practitioners of bowl master the art of moving on the curves of a module similar to an empty swimming pool, while executing technical figures. Finally, ramp skaters use both sides of this same module to realize aerial and gliding figures.

Jump and street riding require the master of skating basics as well as a big self-confidence. Slalom, for its part, constitutes an excellent exercise to learn how to master our speed and coordination.

/ROLLER SKATING FOR ALL 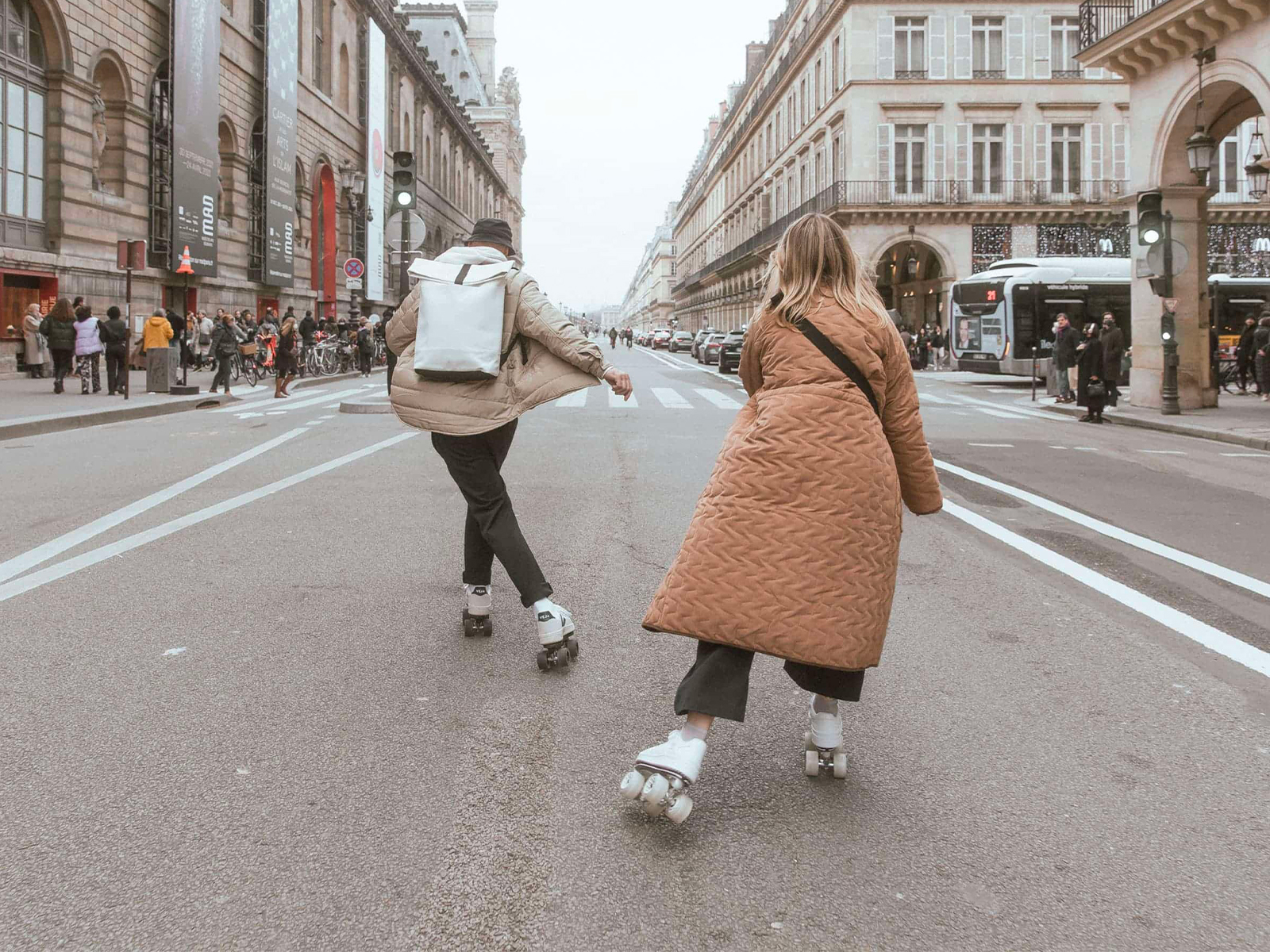 Alone or in group, road skating is the perfect practice for the calm forces. Practicable in either urban or natural areas along bicycle paths, this discipline is the most widespread. It consists in criss-crossing roads, without any competitive spirit. It allows one to enjoy both gliding sensations and surrounding landscapes at the same time. The advantage of this practice is its accessibility. Indeed, it is an intergenerational activity that only requires knowing the basics of roller skating. Popular in Paris where the first association of French skate hikers was born, the movement got structured and democratized in other French metropolises. Rides are generally organized on Friday night or Sunday afternoon. The “Friday night” is becoming popular worldwide.

If you wish to practice road skating alone, you can practice on bike roads or green lanes. For your starts, it is preferable to prioritize green lanes, which are strictly forbidden to any type of motorized vehicle.

Discover these multiple sport practices on roller skates and develop your panel of skating skills. Whatever your gliding style, we are persuaded that you will find the practice suited to your desires and that you will enjoy.