Blog - A collab with Flaneurz, what do you get? 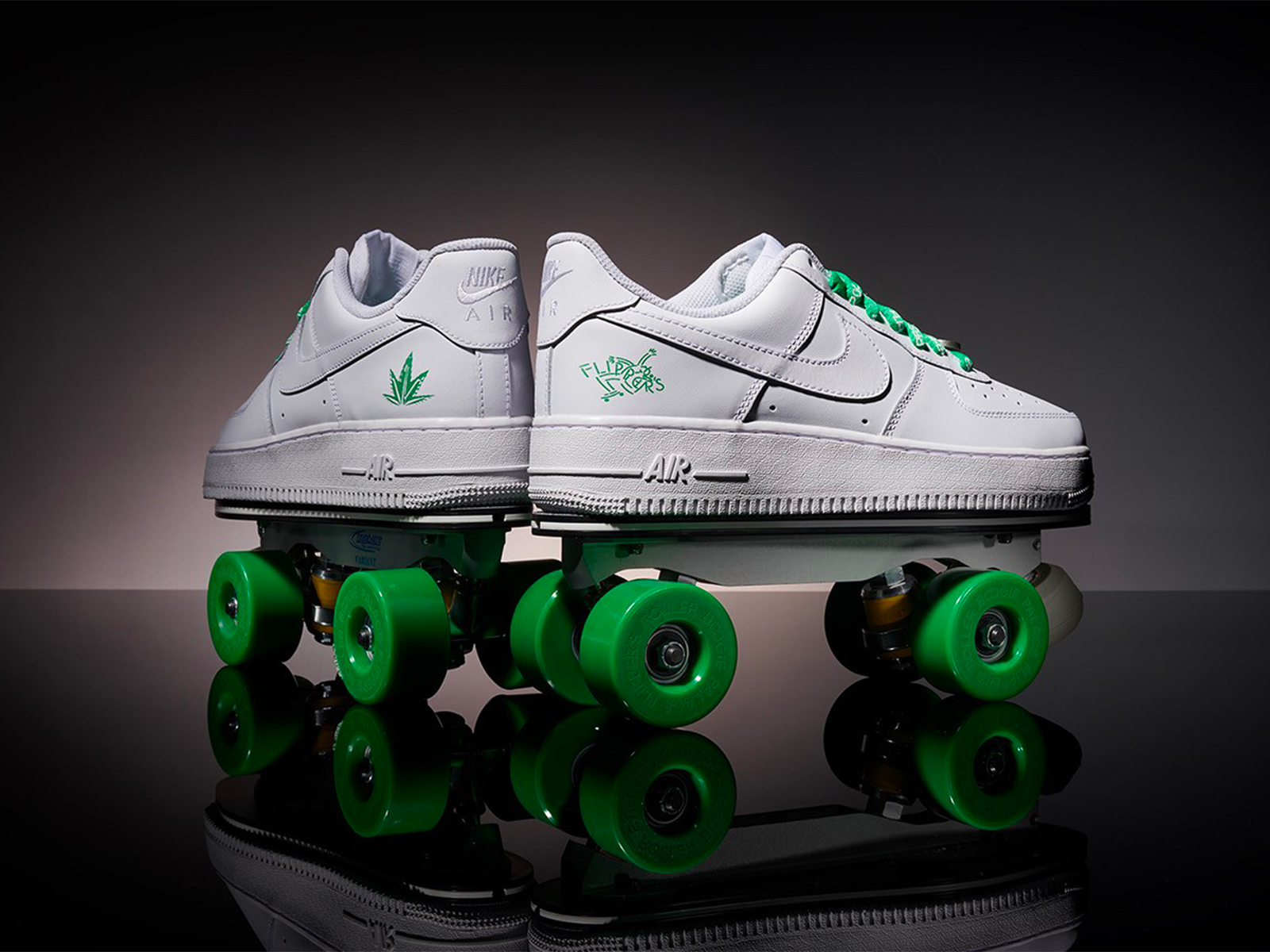 A collab with Flaneurz, what do you get?

On the occasion of the release of the Chronic Skate, a pair of detachable roller skates produced by Flaneurz as part of the collaboration between Flipper's Roller Boogie Palace and the artist Dr. Dre, dive with us into the best Flaneurz collabs and their origins . 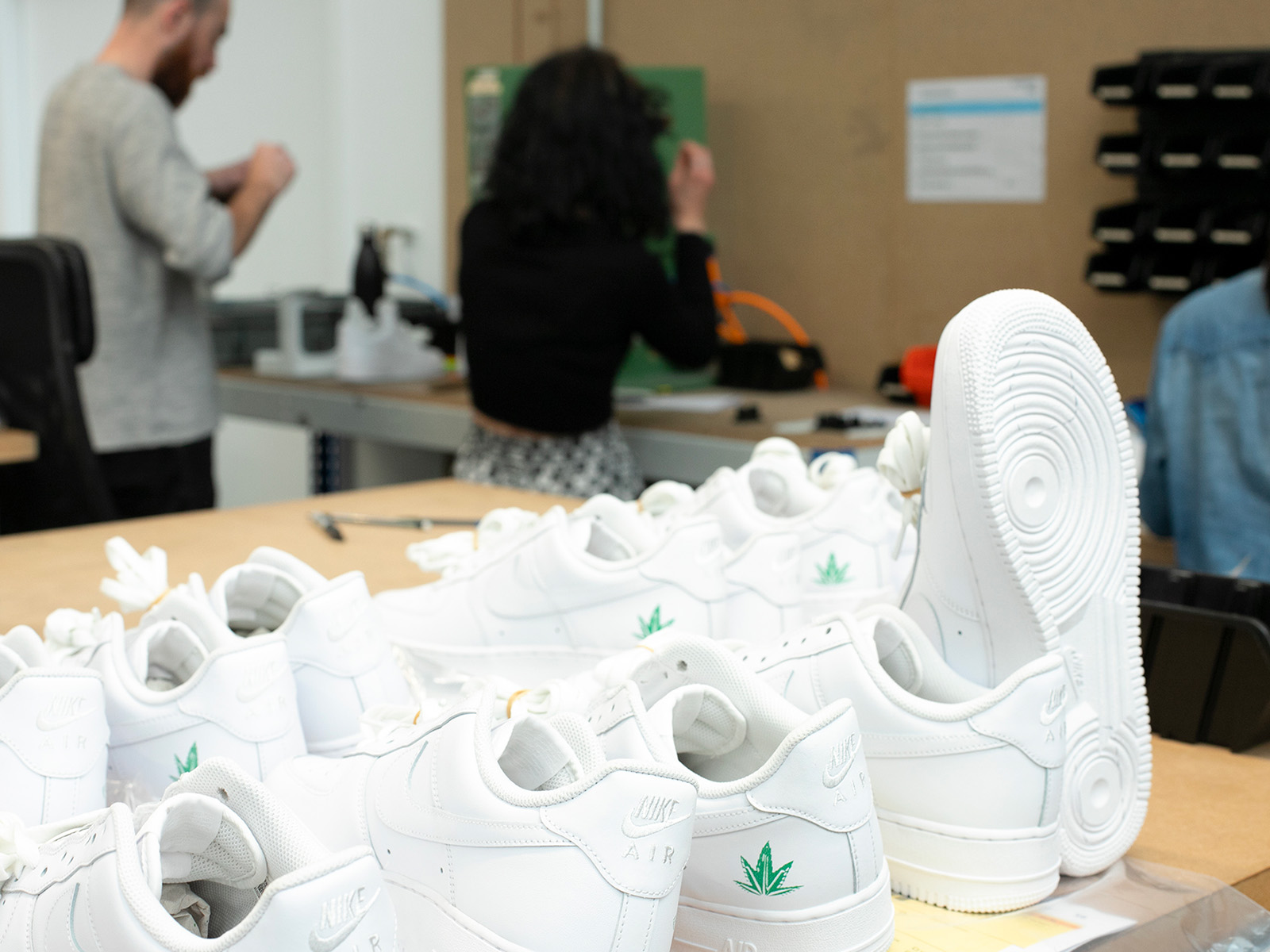 /THE GENESIS OF A COLLABORATION WITH FLANEURZ

Since our creation in 2014, we have signed prestigious collaborations with footwear brands such as Veja, Puma, Reebok, Fila, but also with luxury houses on a  white label basis, and some more artistic ones like the one with Dr. Dre revealed at the end of 2022.

Imagining and carrying out the project of a Flaneurz collab is based on a meticulous process:

/Understand the need of the partner brand.
/Study the feasibility of the project by exploring our field of possibilities: Is it a modification of our roller skates that we have already made or a new element to be imagined in co-creation (frame materials, wheels, key etc...).
/Determine the type of collaboration (co-branding, white labeling of our know-how, events...).
/Determine the type of distribution and dissemination of the collab: who is in charge of communication, positioning, sale of the final product, etc.
/Quantify the project in terms of volume, time and cost.

For the partner brands, the possibilities offered by our know-how allow them great creative freedom. The brand can diversify its product offering by benefiting from our patented, disruptive, unique and French origin technology.

Also, a collab brings media coverage and important visibility to both parties. The mixing of two brand universes allows to reach new markets and to attract the attention of the loyal community. Brands break codes, re-invent themselves and it's up to us  to accompany them in this creative process.


For us, working with brands such as Veja, Puma, Reebok, a famous Parisian luxury saddlery or an artist allows us to increase our visibility and establish our know-how. Successful collabs between a shoe brand and our teams can also allow us to maintain harmonious commercial relationships. It is, for example, following our collaboration with Veja that we opened our first professional shoe account, which enables us to regularly offer you models from the brand in the Collection.

A Flaneurz collab is a work that relies on each pole of the company: Sales, Marketing, Communication, Operations and Production. Each party must decide on the feasibility of the project, validate the process and produce a result. Working with Flaneurz means having the choice to customize many elements. We can make modifications to our Flaneurz detachable roller skates (decks, wheels, frames, shoes) to match the creative idea, but also work with Slades, our daughter brand.

At Slades, we control the production line. This opens up a whole range of possibilities. As soon as the shoe is manufactured, we can imagine injecting the mechanical system directly into the sole mold, a totally revamped upper. Also, working with Slades means having more volume possible thanks to our industrialisation of processes and ultimately more margins. 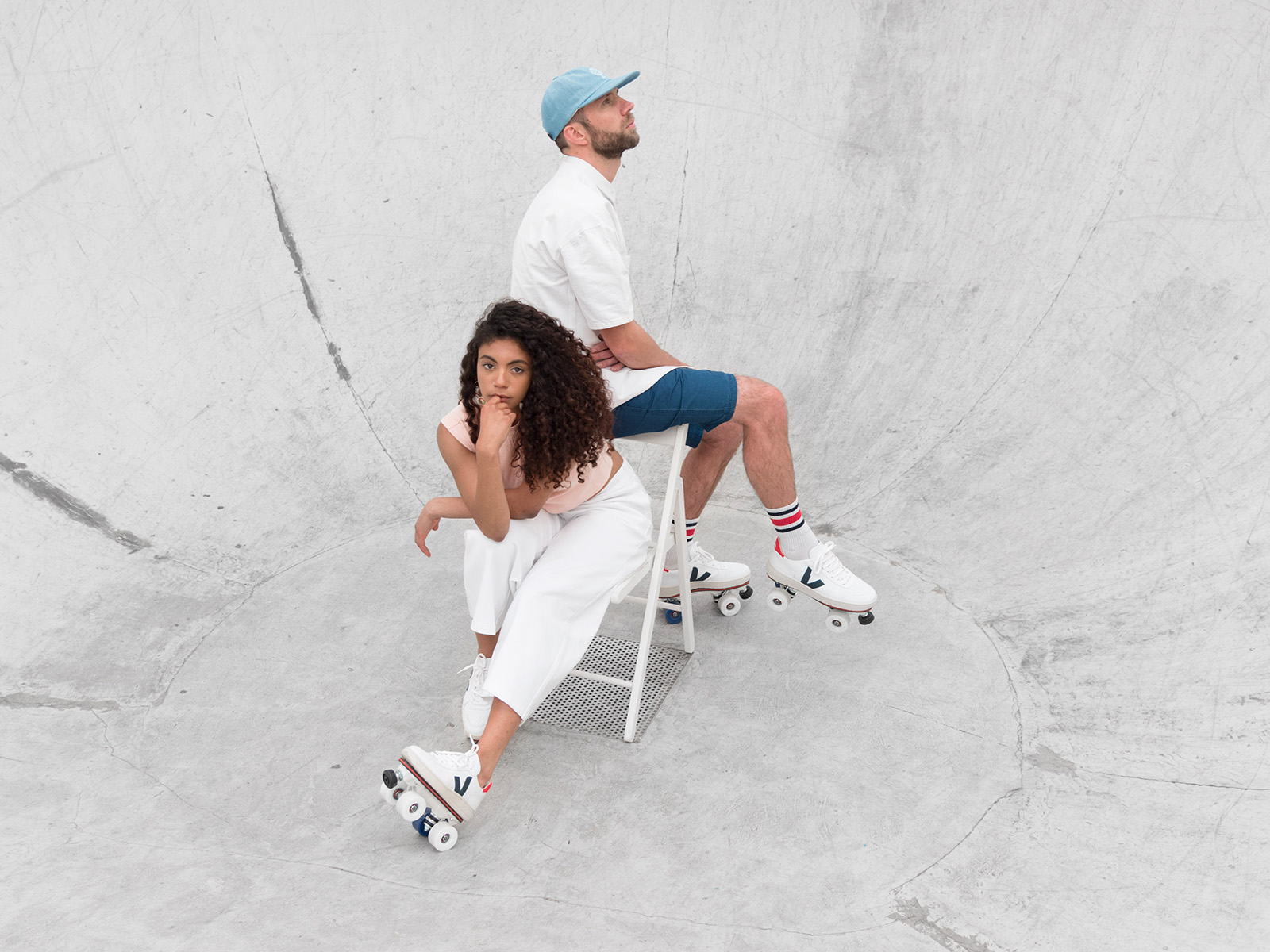 The collaboration between Veja and Flaneurz began in 2015. The brand offers ethical and environmentally friendly sneakers. But also sources of materials and Brazilian workers who produce their models, imagined in Paris. The first model we transformed together was the Pantanal shoe. We proposed this city shoe with a crepe sole on our Kickstarter in 2016, allowing us to show that beyond the sneaker, we could also adapt to a more classic style.

We then collaborate on the Veja V-10 Extra White Nautico Pekin X Flaneurz. Together we decided on the components and colours of the rolling part, so that it would be an extension of the shoe and its colours. This collaboration gave rise to more than 250 press articles, in France and internationally. A collaboration with resonance, which leads us to the meeting of the two brands during a launch evening, in the Centre Commercial boutique in Paris. The opportunity to discover many pairs revisited to the roller quad; a presentation of the two know-how as well as an exhibition of the materials of our rolling part. 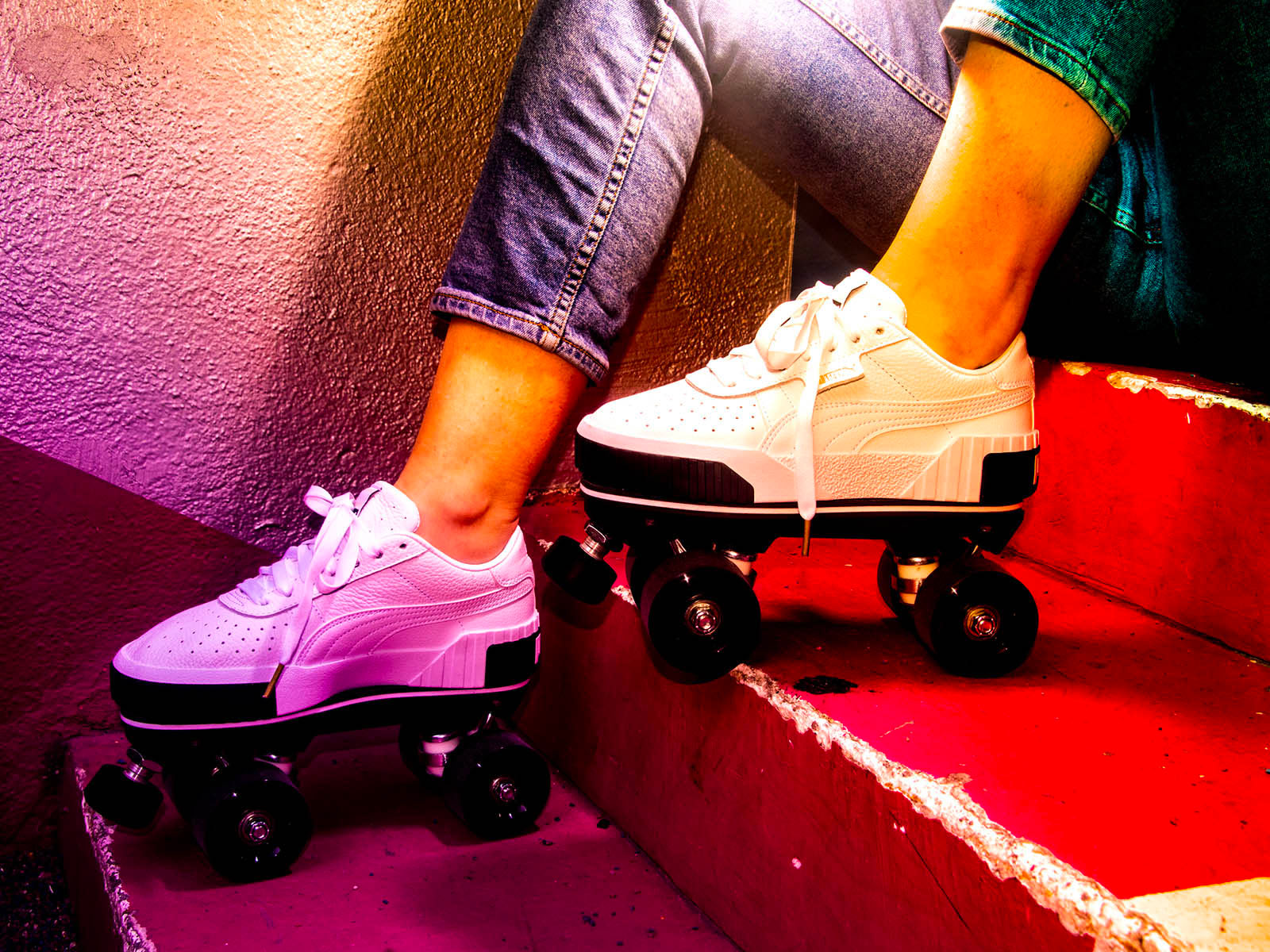 The birth of the Puma x Flaneurz collaboration takes place through Le Bonbon, a marketing agency and free monthly magazine, in 2018. The need? To showcase the Cali model, which is making its reappearance at Puma.

We find the spirit of California in this pair, avant-garde due to the contrasting elements of its  sole. California means roller skating on Venice Beach. It is then quite naturally that we imagine a version with wheels of the pair which signs its great return, with a rolling part adapted to the practice of the beginners (our old range First). 100 pairs were produced and offered at the Cali Roller Party, the inauguration party of the model . We present our innovation and invite content creators to try a few  roller dance steps. 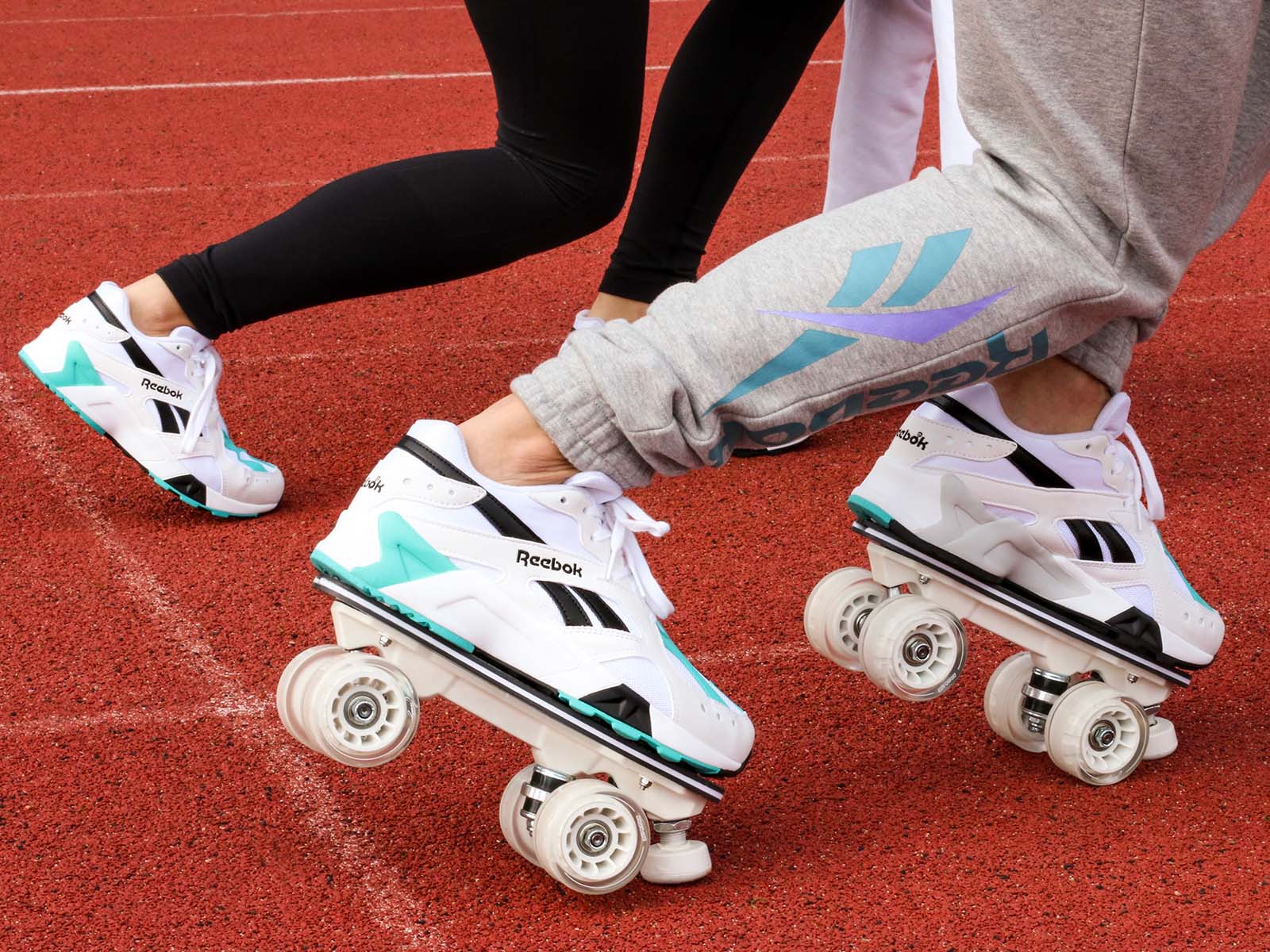 With a rich catalog of models from the 90's, Reebok decided to bring the iconic Aztrek back to life. The very exclusive Reebok X Flaneurz capsule was available in 12 models only on our e-shop and 35 pairs were offered by Reebok to their ambassadors. The Reebok and Flaneurz style teams are working on a capsule honoring the history of roller skating for Flaneurz and vintage trainers for Reebok. We chose to mix our two ranges of rolling parts to create an exclusive, very light and reactive one with the Iconic deck and Premium wheels.

Reebok x Flaneurz is also an ephemeral event: Mégastore. In the middle of the Reebok pop-up store, presenting the whole "Re-Run the 90's" range, Flaneurz invested  the second floor of the Mégastore to offer 6 roller dance workshops and present co-created detachable rollerblades. Animated by our ambassadors, a large audience came to discover the basics of roller dance on the sounds of the 90's. 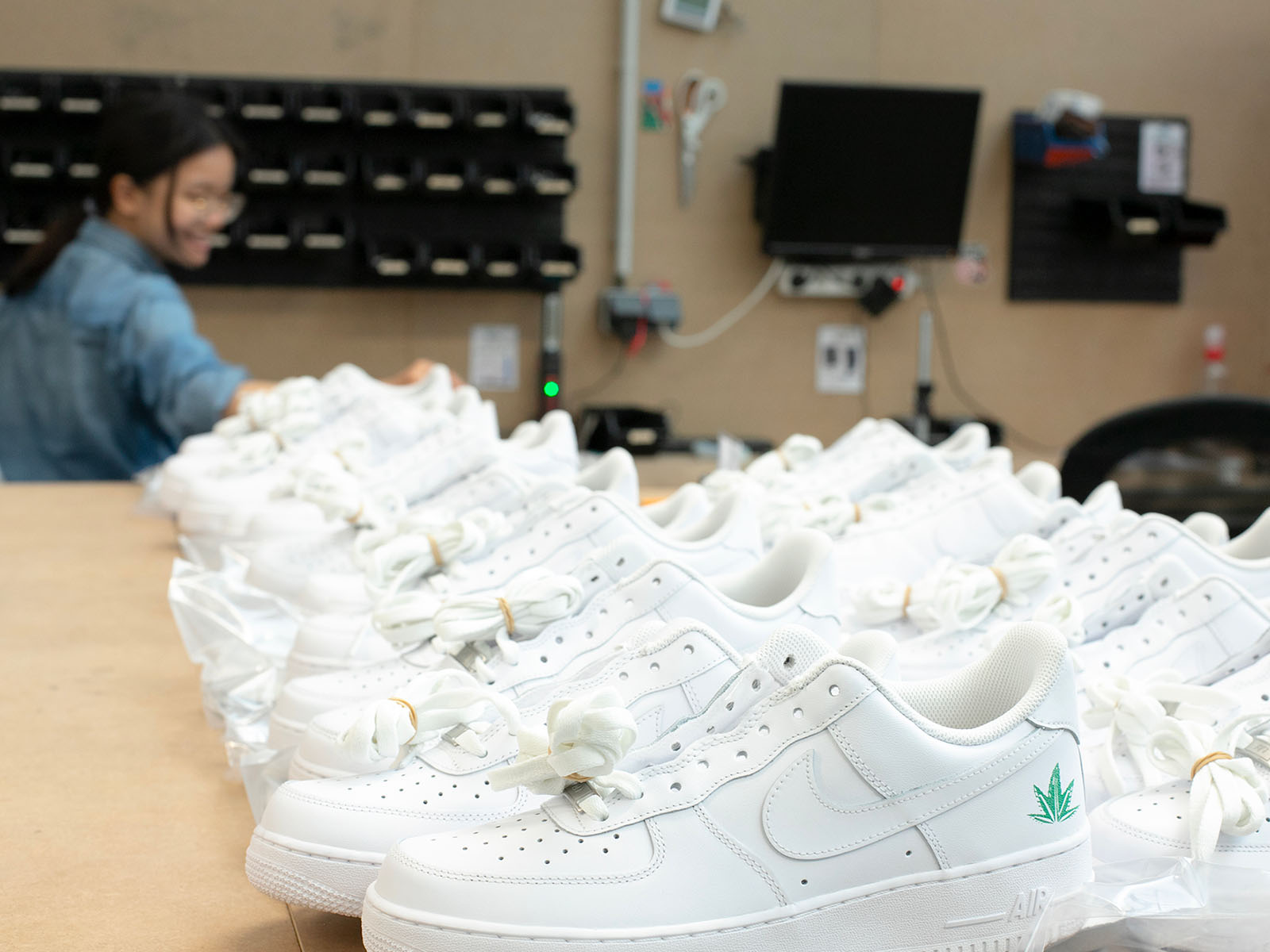 Liberty Ross founded Flippers in West London. This new space, on two floors, can accommodate 2500 people who come to have fun  to the rhythm of the numerous parties organized. A welcoming ground for the growing roller skating community.  London's new top roller spot offers a unique event for skaters enthusiasts and celebrities alike. Liberty Ross teams  up with her husband Jimmy Iovine's long-time friend Dr. Dre to celebrate the 30th anniversary of his first studio album, The Chronic. For this  anniversary, Liberty Ross and Flaneurz are working on a custom Air Force One that has been transformed into a detachable roller skate. The pair is featured in the Flipper's Skate Heist video.

The Flippers launch involves big names like Central Cee and Usher. At the Chronic Skates launch party artists such as Dr. Dre, Mary J Blige, General Levy, etc. The collaboration was made through Liberty Ross. The owner of Flippers wanted this pair to enliven the history between Dre and roller skating. She says: "Dre and his original group NWA first emerged in skating rinks, as did many hip-hop groups in the 80s. This year is Chronic's 30th anniversary and we thought it would be a great collaboration to close the loop. The design is deliberately refined, as Dre keeps his trainers extremely clean and fresh. They're the only shoes he wears. I decided to create a lace up, a deubré Flippers and an insole, as well as a grip under the shoe. The whole shoe is kept very simple but solid."

Liberty Ross approached us to have their shoes made into a detachable roller skate. Liberty's need was to use Flaneurz's expertise to create a custom piece. The variety of possibilities at Flaneurz made it possible to create "The Chronic Skate", a pair of Air Force One with specific wheels, laces and a key. The goal was to make this iconic shoe unique. For this event, 200 pairs were made, won in a draw or now for purchase in one of the Flippers London and New York shops. You can also get this pair on NTWRK. In addition, Flippers has sent pairs to many celebrities: Snoop Dogg, Lebron James, Dj Snake, Selena Gomez, Rihanna, Drake, Kendall Jenner, etc..

Showing the seriousness and authenticity of a product to different communities are the objectives at Flaneurz. We have made a series of collabs with various brands. Customized projects for each oneand the will to generate unique pairs in  the image of the collab. For the brands, working with Flaneurz means using a unique French know-how. We value this visibility in order to communicate on our innovation. We use the notoriety of a major sneaker brand to democratize the practice of detachable roller skates. To show that we are actively participating in the evolution of soft mobility, a current and future issue.